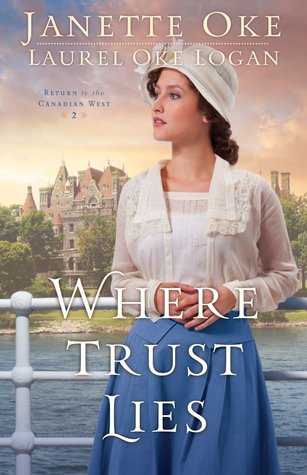 I was THRILLED when I discovered Janette Oke was writing the first book in this series – Where Courage Calls!

My review is HERE

Anyone who watched the wonderful movie Hallmark put out a few years ago knows that – while it was supposed to be based on her first book in the Canadian West series – it was done a bit differently.

I’ll admit that it’s an intriguing idea – but true fans of Janette Oke’s work were more than a little surprised… or at least I was.

Then Janette and her daughter Laurel decided to write a novel about the adventures of the character from Hallmark’s movie – and IT COULD NOT HAVE BEEN BETTER!

It bore certain resemblances to the film but, true to Janette’s staggering talent, it was SO MUCH BETTER!

Where Trust Lies is no different in that way!

Janette Oke is a tremendous writer and it’s clear her daughter has inherited that talent as well!

Since I don’t watch the series (we haven’t had cable for several years) I know nothing about whether or not this story lines up with what is going on but Bethany House proclaims it as a companion to the series so there must be some similar events going on there.

I refuse to give anything away but I have to commend Janette on her ability to write such emotional scenes. Who will Beth choose… What will Beth choose? Even in an age where trains cross so much more of the country, there is much that remains untamed and wild.

How would you decide? I’m not sure I could…

East or West… Love or Family… Obligation or Duty… What will Beth choose? – Tweet this!

Will the comfortable & privileged East win out over the wild & wonderful West? – Tweet this!

{MORE ABOUT WHERE TRUST LIES}

She loves her friends and students in the West, but family obligations have called her home. Where does she truly belong?

After a year of teaching in the Canadian West, Beth Thatcher returns home to her family. She barely has time to settle in before her mother announces plans for a family holiday–a luxurious steamship tour along the eastern coast of Canada and the United States. Hoping to reconnect with her mother and her sisters, Beth agrees to join them, but she quickly realizes that things have changed since she went away, and renewing their close bond is going to be more challenging than she expected.

There’s one special thing to look forward to–letters and telephone calls from Jarrick, the Mountie who has stolen her heart. The distance between them is almost too much to bear. But can she give her heart to Jarrick when it will mean saying good-bye to her family once again–and possibly forever? And will she still want to live in the western wilds after the steamship tour opens up a world of people and places she never imagined?

Then comes a great test of Beth’s faith. Someone in her family has trusted the wrong person, and suddenly everything Beth knows and loves is toppled. Torn between her family and her dreams, will Beth finally discover where her heart truly belongs?

A companion story to Hallmark Channel’s When Calls the Heart TV series!

I would also encourage you to read the books in the original Canadian West series! Bethany House has bundled them in eBook format:
AMAZON   CBD   B&N   ITUNES

And you can find more information about Where Trust Lies
and where to buy the book from these popular sites.

I received the book free from the BookLook blogger program
in exchange for an honest review.

Disclaimer: I have no control over the ads you may see below.
I am sorry if any of the content is inappropriate.

First, I want to thank the wonderful readers and friends who stopped by our table today. You made the event worth attending. God is Good! He got me through my panic attack and then made certain our day better than I expected. That being said, our day started with an attack of rude, crude, and sexist singling out. There were more than twenty authors/artists selling items that were NOT books, not all book related... and only some of them alongside actual books. However, I was told I could not even display BOOKsleeves along with my books. Initially, Mr. McMahan assumed I had no books to sell. When I pulled them out of the box, he said they were fine to sell, but that I could not sell the BOOKsleeves. When I made the point that others were selling non book items, he said they were displaying them only, so I said I would do the same. He informed me that I could not even display them. I was told (rudely... gruffly) that I needed to remove the items immediately. By the time he walked away I was in the midst of a panic attack. Then, for the remainder of the day, every time he walked by my table, his smile changed to an angry, harsh frown, making it nearly impossible for me not to have another panic attack. I'm not at all certain I will be returning to the Rose Glen Literary Festival next year. Aside from my horrifying experience, the entire event has gone downhill. Lunch consisted of a salad... no entree... no vegetables. And, the other years I've attended, the lunch required two banquet halls. This year, only one was used. Both the main hall, and the secondary hall were dotted with empty tables. Also, several people mentioned to me that they had never had their phone calls / e-mails answered. Clearly I'm not the only one to have an issue with Mr. McMahan. Ironically, our keynote speaker talked about how often the actions of women are judged by an entirely different standard than men. I expect that is true of my experience today. I cannot imagine Mr. McMahan leaning in menacingly and speaking so gruffly to a man. A woman he both outweighs and is more than a foot taller than, however... Obviously he has no problem trying to intimidate a woman.
Happy Valentine's Day!
EXCITING NEWS! 🎉🎊📣🙌 @5_craftygals announced this morning that they now have FREE SHIPPING (in the US) for ALL BookSleeves! 📬 EXCITING NEWS! 📬 etsy.com/shop/5CraftyGals 💰 #SALE #Savings #SAVE #BookSleeves #Bookish #BookLove #booksofinstagram #booklover #BookStagram #booksbooksbooks #bookishsleeves #Fandom #hearts #sparkle #glitter #Love #FREE #FreeShipping #Shipping #News #ProtectYourBooks #FlauntYourFandom