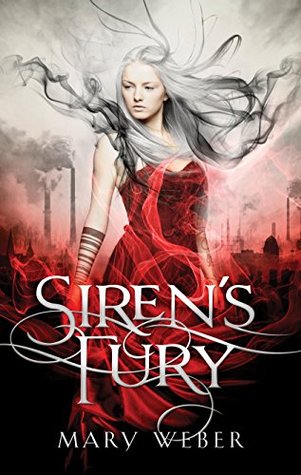 OK… if you had asked me a year ago (actually… more like two at this point) if this was considered Christian fiction, I probably would have said “Huh…that’s really a thing?”, but as I’m reading more and more in the genre, I’m discovering that Christian Speculative fiction has spread its influence far and wide.

And Siren’s Fury is a prime example of that!

It’s an intriguing read and one I think most teens wold enjoy.

Interesting also; to think that you can find God’s plan – in a fictional story, about a girl who “shouldn’t” exist, in a magical land at war.

And inspiring that Nym has found a way to be “good” and “help” with her elemental gift. With such power, it could easily have gone the other way. In fact, considering how much Nym detests her powers, it’s amazing that she sets off in search of a way to get them back… in order to save the day!

No, she’s not perfect – are any of us? Yes, the world around her is full of evil, despicable people – isn’t ours as well?

As far as the series goes, this kept the story going in a good way and has fans salivating for the next book!

Not necessarily a series I ever saw myself reading but I can’t say I’m sorry I picked it up! If you enjoy reading about magic and fantastical powers – have at it!

And it’s a clean read… especially by today’s standards. LOL!

Here is a brief synopsis from Thomas Nelson

Nym risked her life to save Faelen, her homeland, from a losing war, only to discover that the shapeshifter Draewulf has stolen everything she holds dear. But when the repulsive monster robs Nym of her storm-summoning abilities as well, the beautiful Elemental realizes her war is only just beginning.

Now powerless to control the elements that once emboldened her, Nym stows away on an airship traveling to the metallic kingdom of Bron. She must stop Draewulf. But the horrors he’s brought to life and the secrets of Bron are more than Nym bargained for. Then the disturbing Lord Myles tempts her with new powers that could destroy the monster, and Nym must decide whether she can compromise in the name of good even if it costs her very soul.

As she navigates the stark industrial cityscape of Bron, Nym is faced with an impossible choice: change the future with one slice of a blade . . . or sacrifice the entire kingdom for the one thing her heart just can’t let go.

I received this book free in exchange for an honest review.

I have no control over the ads you may see below.
I am sorry if any of the content is inappropriate.

First, I want to thank the wonderful readers and friends who stopped by our table today. You made the event worth attending. God is Good! He got me through my panic attack and then made certain our day better than I expected. That being said, our day started with an attack of rude, crude, and sexist singling out. There were more than twenty authors/artists selling items that were NOT books, not all book related... and only some of them alongside actual books. However, I was told I could not even display BOOKsleeves along with my books. Initially, Mr. McMahan assumed I had no books to sell. When I pulled them out of the box, he said they were fine to sell, but that I could not sell the BOOKsleeves. When I made the point that others were selling non book items, he said they were displaying them only, so I said I would do the same. He informed me that I could not even display them. I was told (rudely... gruffly) that I needed to remove the items immediately. By the time he walked away I was in the midst of a panic attack. Then, for the remainder of the day, every time he walked by my table, his smile changed to an angry, harsh frown, making it nearly impossible for me not to have another panic attack. I'm not at all certain I will be returning to the Rose Glen Literary Festival next year. Aside from my horrifying experience, the entire event has gone downhill. Lunch consisted of a salad... no entree... no vegetables. And, the other years I've attended, the lunch required two banquet halls. This year, only one was used. Both the main hall, and the secondary hall were dotted with empty tables. Also, several people mentioned to me that they had never had their phone calls / e-mails answered. Clearly I'm not the only one to have an issue with Mr. McMahan. Ironically, our keynote speaker talked about how often the actions of women are judged by an entirely different standard than men. I expect that is true of my experience today. I cannot imagine Mr. McMahan leaning in menacingly and speaking so gruffly to a man. A woman he both outweighs and is more than a foot taller than, however... Obviously he has no problem trying to intimidate a woman.
Happy Valentine's Day!
EXCITING NEWS! 🎉🎊📣🙌 @5_craftygals announced this morning that they now have FREE SHIPPING (in the US) for ALL BookSleeves! 📬 EXCITING NEWS! 📬 etsy.com/shop/5CraftyGals 💰 #SALE #Savings #SAVE #BookSleeves #Bookish #BookLove #booksofinstagram #booklover #BookStagram #booksbooksbooks #bookishsleeves #Fandom #hearts #sparkle #glitter #Love #FREE #FreeShipping #Shipping #News #ProtectYourBooks #FlauntYourFandom